- this is how it works

In fact, C4ISR incorporates every army function and operation. It determines faster speed, better resolutions and decisive actions- making it the key to mission success.
We want to synergize tactical, operational, and strategic performance. Information and data flowing through multiple systems  must be received and disseminated by the commander timely and accurately.

Harnessing information and data as new source of powerful weapon has become crucial nowadays. And real-time reaction is vital. That's why 7StarLake's Command, Control, Communications, Computers, Intelligence, Surveillance and Reconnaissance (C4ISR) solutions emphasize on ultra-high performance system integration. We focus on the capabilities to control - because control lead to dominance.

SR800 & HORUS200 are equipped with Ultra-High Performance Intel® Xeon® D-1587 CPU. In a scenario where virtual machine is integrated with C4ISR system, the 16-core processor allows the CPU resources be reallocated to one or more virtual machines. For instance, four cores are assigned to one virtual machine would mean the user now has maximum four different operating systems running on the same physical computer at the same time.

In this way, IT operators will no longer be disturbed by numerous interfaces, monitors and humongous servers. Various and complex system connecting one another should work coordinately, interpreting the received data and representing the commander's order.

All data and assets can be managed from one location. Ideal hardware utilization, expansion potentials and high efficiency operation are further guaranteed. In battlefield reality, where one second difference defines success and failure, the application of virtualization machine has become indispensable.

We want to synergize tactical, operational, and strategic performance.  Therefore, information and data flowing through multiple systems must be received by the commander timely and accurately; same as those to be disseminated.

Less physical hardware and more expansion potentials, they are not the only reason why organizations and enterprises are turning more to Virtual Machine.

In fact, authorities and private sectors are using virtual machines because it grants users multiple available fields for running operation system under a limited situation. That is to say, the utilization of virtual machine effectively save cost and achieves ultra-high efficiency.

Take SR800 & HORUS200  for example, the CPU resources of their 16-core Ultra-High Performance Intel® Xeon® D-1587 processor can be allocated to one or more virtual machines. Various operating systems can thus run at the same time, without having to adopt extra physical hardware and server. Meanwhile, all data and assets can be managed from one location. It achieves an ideal hardware utilization and lead to unlimited expansion potentials, which undoubtedly are the keys to mission success.

Virtual machine not only helps saving money on hardware and energy costs. Nowadays enterprises are also taking advantage of its safe virtual environment. Damage to the virtual machine would not cause damage to the physical server. Disaster recovery is quick. In addition, when running operating system in virtual environment, license key required by the virtual OS would be the same as that of the hard drive ID. 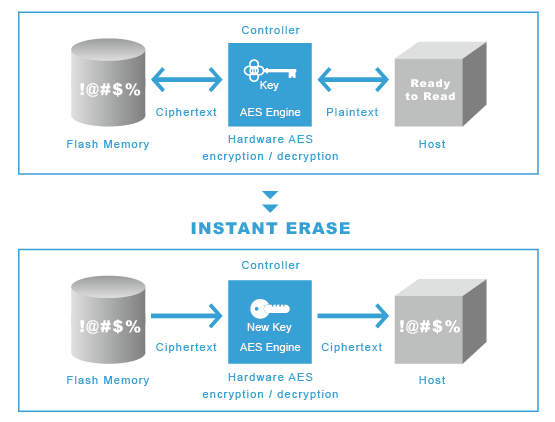 Under emergency situation, when written data needs to be erased immediately, a Secure Erase Button is indispensable. Instant Erase is a particular feature for SED (Self Encryption Drive). It is faster than Quick Erase to make all written data invalid. The encryption and decryption is controlled by an AES key on the path; once the AES key is replaced by a new one, the data becomes unrecognizable.

The Advanced Encryption Standard (AES) is one of the block cipher specification adopted by U.S. government. AES is enhanced and approved by the U.S. National Security Agency (NSA), and is now used worldwide. 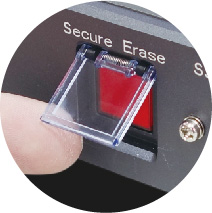 The kind of cryptographic module can encrypt and decrypt rapidly on software and hardware with relatively less memory, thus is easier to practice and implement.

The larger size of key adopted, the more possible keys there are. Take 256-bit encryption for instance, it generates 2^256 possible keys, taking more years than the age of the universe (13.8 billion years) for hackers to break through.

AES Key is generated randomly through various rounds of algorithms. Each round consists of several processing steps, even the supplier and the user cannot access to the cypher. To date, AES encryption has never been broken in a way its predecessor DES (Data Encryption Standard) was way back in 1999.

Taking into consideration the strength, versatility, and speed of the cipher, AES Encryption is undoubtedly the best encryption program out there. To guard top-secret information, given the current state of technology, governments and the military select, and only use the AES Encryption. 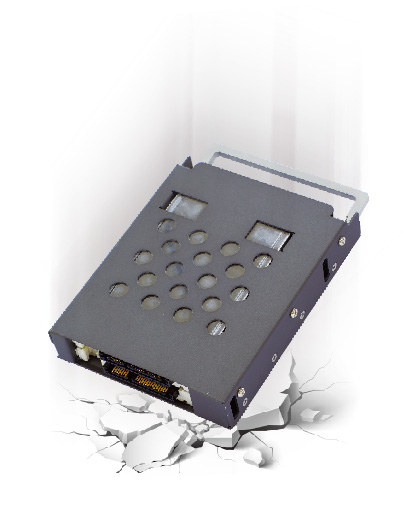 7StarLake customizes the MLC-SSD slot in a way the Disk does not fall off during clash and collision. We envisage different scenarios where the unique anti drop protection prevents the pins from moving, ensuring a optimum environment for operating the computer.

Further, 7StarLake offers an unique enclosure that covers the entire component. The design ensures the pin header be covered and protected completely. Removal and installation of the SSD thus will not cause any minor damage to the pin headers as well as the components.

The dual Removable SSD (Solid-state Disk) provides a compact self-contained system to store and retrieve data from ruggedized and removable 2.5” Flash Disks and have been qualified to meet the most demanding MIL-STD-810 environments. The ultra durable metal casing along with the handle allow the dual 2.5” SSD be removed and inserted at the same time from the single drive bay easily and quickly. Maintenance and replacement conveniences are therefore guaranteed. 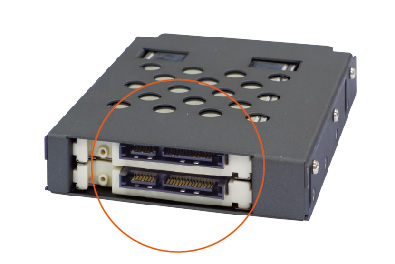 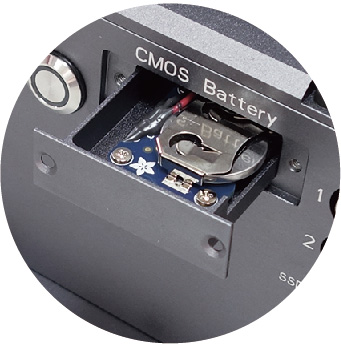 Generally speaking, to exchange the battery from a rugged solution is complicated and has the possibility to affect the original function of water and dust resistance. SR800 has an easy swappable battery tray allowing users to directly replace. Pull the tray fully out of the computer and a coin-cell battery can be seen. Replace it with a new CR2032 battery and push the tray back into the computer. Lock the screw, and the replacement is completed.

SK710, the power board adopted by SR800 & HORUS200, supports input range from 12V to 40V. Possessing military standard filter for EMI avoidance, SK710 guarantees a stability of voltage and electric current under system operation. It is especially suitable for application in military or other harsh environment.

MIL-STD-461/1275/704 power supply standards outline requirements for any military ground vehicle power supply. They can also be useful to civilian manufacturers of off-road vehicles and heavy equipment. Military vehicles employ a nominal 28 V power supply system and much of MIL-STD-1275 requires ensuring these systems are able to handle transient spikes and surges. 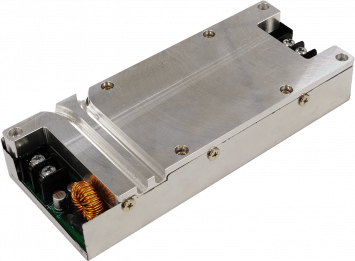 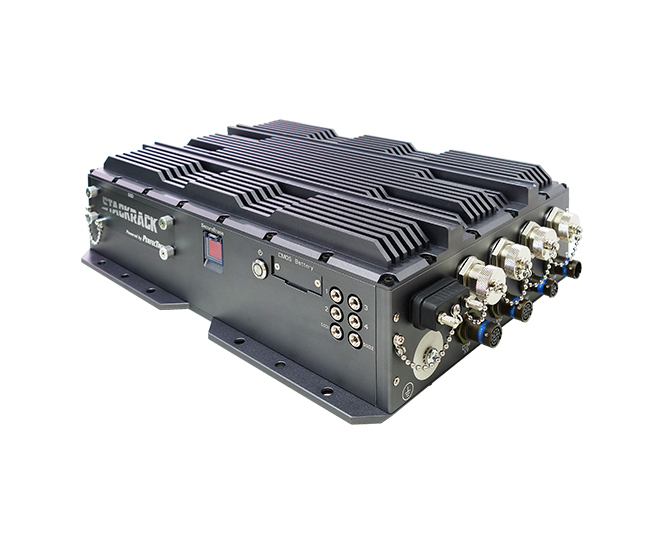 is designed in cooperation with global tier one defense system integrator. The rugged virtualization supercomputer is born to meet the demanding requirements of C4ISR land system. It is of the highest quality, both internally and externally.

During combat operation, the computer is hitched directly to the inside of tanks. Its robust enclosure effectively diminishes the sudden impact of extreme shock, vibration and bumping while operating on site. SR800 embodies authentic ruggedness by standing up to the intrusion of dust, accidental contact, and water with its IP65 compliant sealed compact chassis, along with the Souriau  D38999 connectors. 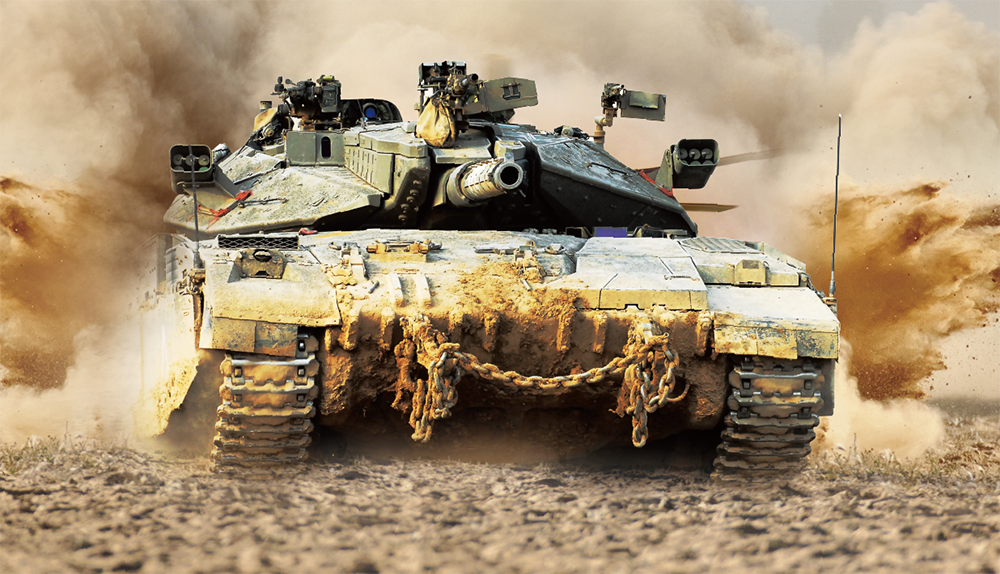 7StarLake guarantees reliable and supreme solutions for industrial and military applications. All of our selected components are of authentic industrial grade, and have verified their stability and durability through a series of Wide-range Temperature tests.

7StarLake's unique high thermal conductivity enclosure is designed with high and low fin plus wave line, creating adequate airflow and increasing the surface area in contact with the cooling medium up to 30-40%.

RAM generates intense heat while the sever is operating in high speed. The aluminum heat spreader touches the RAM and the upper cover directly, efficiently dissipate heat from the heat source to the external enclosure.
​​​​​ 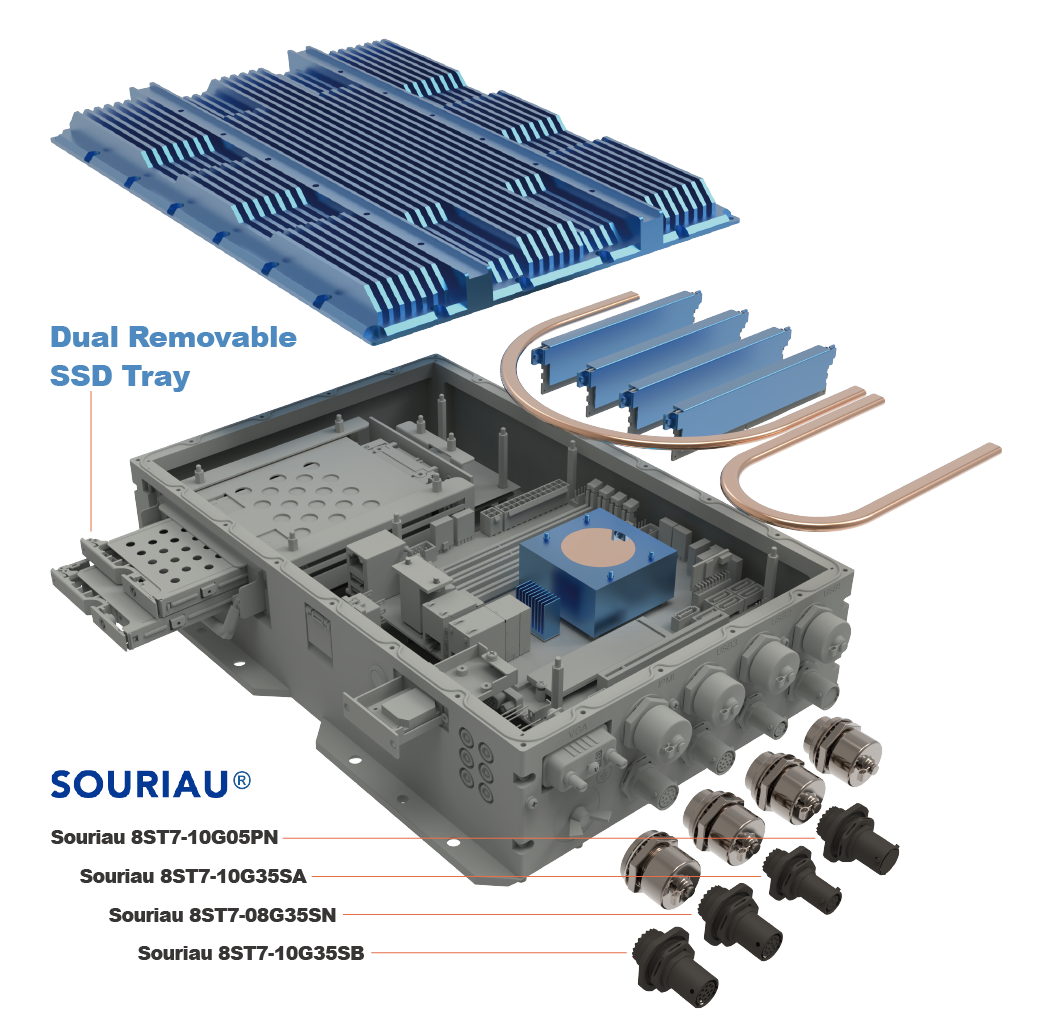 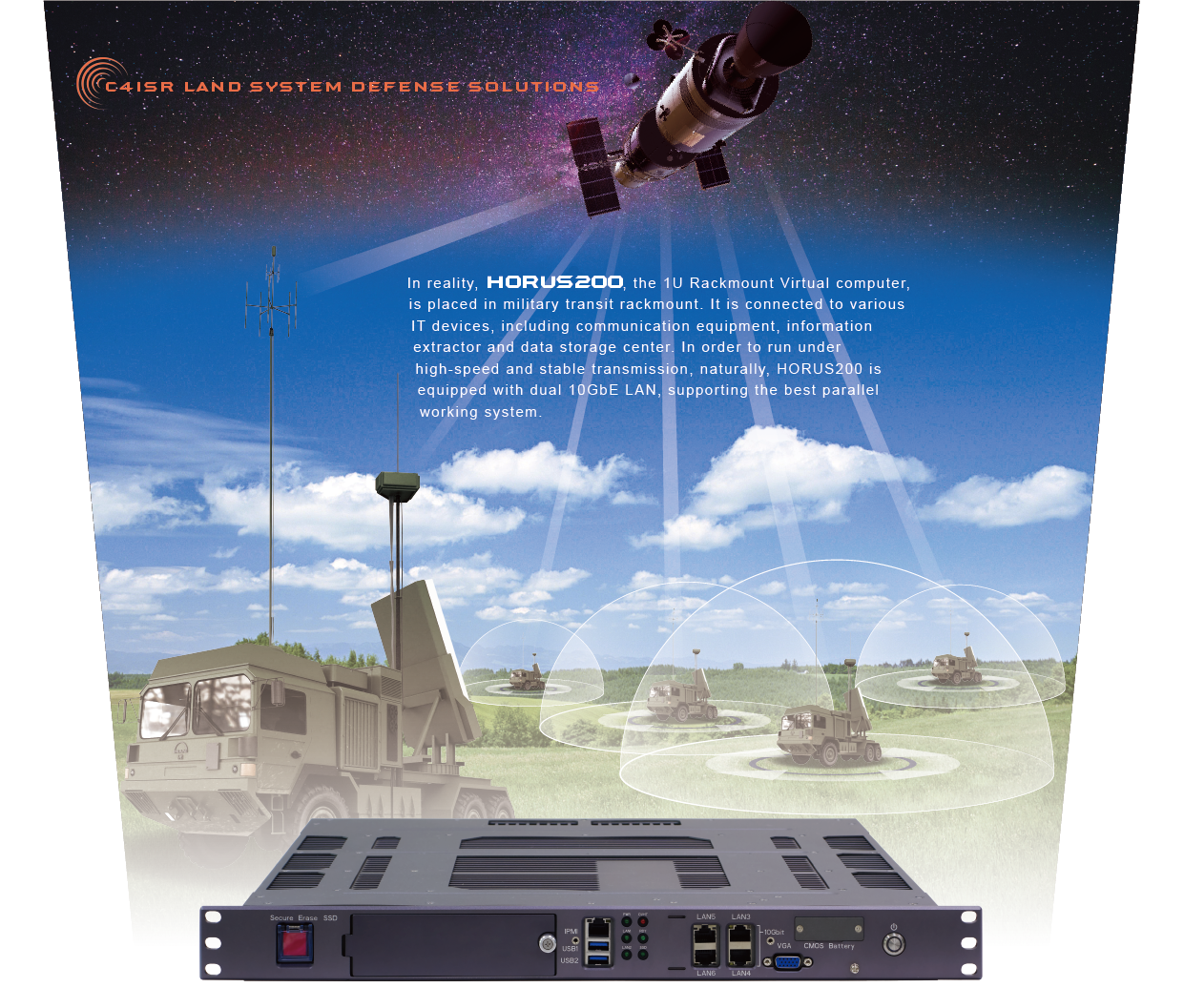 Comparing to general 1GbE LAN, 10GbE LAN provides key improvements in terms of bandwidth, latency, scalability, reliability and application performance. Moreover, 10GbE LAN is possible to support Virtual Machine application, which is a considerable function for parallel working system. Allowing multiple operation environments which are isolated from one another, yet through the same server, Virtual Machine enable several tasks to be done in one server simultaneously, suitable for limited space or portable control and command center. 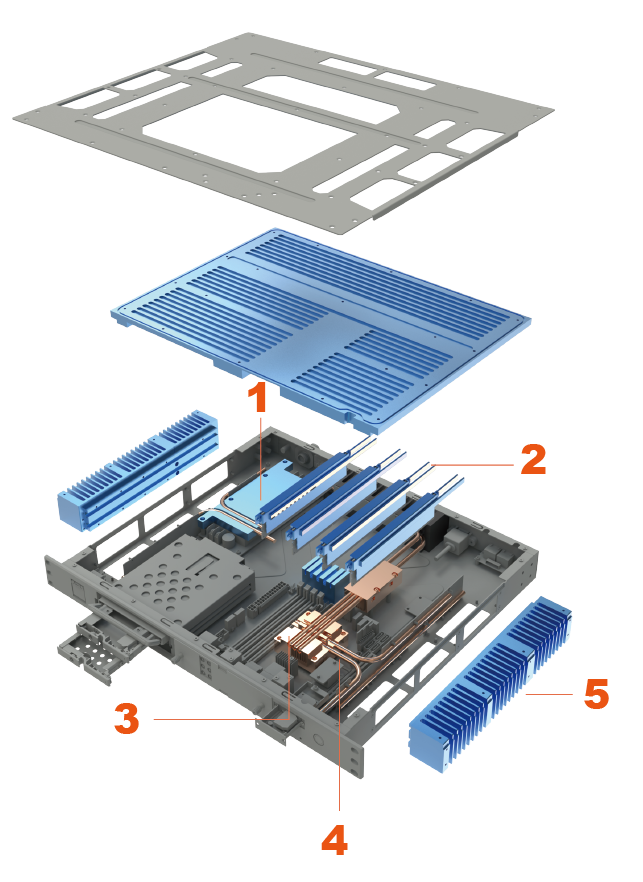 1. Exclusive Heat Spreader for MIL-STD-461 Power Module
Power module generates fierce heat while operating. To ensure stability, an aluminum heat spreader is placed directly on the EMI Filter/MIL-STD-461 compliance power module to absorb and transfer heat to the external cooling medium. Through the mechanism, the operating temperature can decrease up to 15~20%.

4. High Efficiency Copper Heat Pipe
Placed directly on the CPU, the copper heat pipes evaporates the inside liquid while absorbing heat from the unit. The vapor then flows from the heat source (evaporator) to the cold interface (condenser) through heat pipes, and condenses back into a liquid – releasing the latent heat. The cycle of the liquid-vapor repeats by capillary forces, and the temperature of the device can be dropped significantly due to high heat transfer coefficients for boiling and condensation.